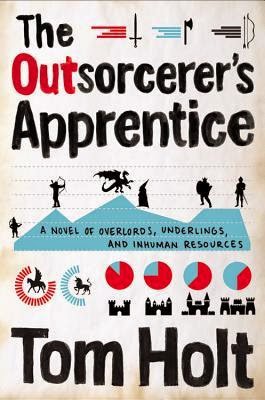 Do you like fantasy? Do you like books that are a bit (ok, a lot) silly?
If you answered yes to both those questions, then go read this book. Go read it right now.

Still here? Need more convincing that you should read this?
Very well, then. It goes like this: there's a land, in another dimension. A land where all the characters of the fairytales you used to read as a child are real.
It's not nearly as sweet and whimsical as you may think. It's a lot sillier.
There are wolves in the woods. They dress up as old ladies and try to lure unsuspecting girls into their houses to eat them. Not that they ever succeed, mind. There's always a convenient woodcutter coming to the rescue. Also, a girl named Buttercup has figured out a rather clever way to deal with the wolves: she slaughters them with her hatchet and steals their valuables.
There are elves in the woods, as well, and they don't like humans much. But don't worry, they're too busy writing snarky reviews of each other's books and playing Vivaldi's four seasons 24/7 for the benefits of call centers all over the globe to be much of a threat.
Goblins and Dwarves have been fighting a war for generations. Battles are decided by games of "I spy" and treaties happen over "Monopoly".
Oh, and there's a wizard. Have I mentioned that there's a wizard? He dabbles in the economy of all these little states, plagued by ogres and witches and dragons and talking wolves. No one quite knows what his deal is, only that he's been around for as long as anyone can remember.
But of course, a place such as this can't really work, it doesn't make sense. Anyone would see this, if they think sensibly about it long enough.
It's a good thing no one thinks too hard about it. Until now. Now, it's becoming clearer and clearer to Buttercup that an economy based on just woodcutters doesn't work. And she can't help but wonder why the hell the wolves keep coming back to the woods, if they never survive. And how the hell are there still wolves? They should have died out generations ago. What do they eat, if the villagers are always saved by the woodcutters?
The book is full of ingenious ideas such as these, showing both the holes in the logic of the typical fairy tale world and how someone might exploit this kind of place to their own ends.
"The Outsorcer's Apprentice" features several hilarious characters, such as a lawyer whose goal in life is to lead the biggest court-case ever, and now he's "off to sue the wizard", as he puts it, a intrepid goblin king who wants to lead his subjects into a new era (and if their new occupation won't be nearly as worthy of respect as the last one, well, who are we to judge?), a knight who really doesn't want the hand of the princess and half your kingdom as a reward, thank you very much.
There's Buttercup, who may be one of my favorite characters ever. She's always either manipulating money out of people or coming up with some crazy and morally questionable scheme to make profit. Not to mention, the girl's got brains.
There's prince Florizel, who has popped out of nowhere and doesn't seem to know a thing about ruling a country. Not to mention the ridiculous ideas he has about food.

I hope that I have convinced you now: go ahead and read this book - just don't do it while you're in public, because you won't be able to stop snickering and people will think you've gone out of your mind.