Review: The Iron Trial by Holly Black and Cassandra Clare 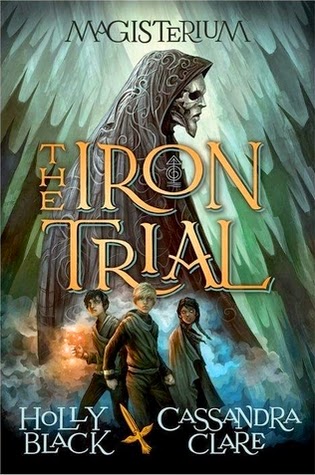 The main character in "The Iron Trial" is Callum "Call" Hunt. He has the potential to become a mage, but his father has always warned him that magic is dangerous. Despite Call's best efforts, though, he is forced to go to the Magisterium, to be taught how to use is magic.
This book is very reminiscent of "Harry Potter" in some ways. We have a magic school in a secret location. We have a young boy, who has magical powers. His encounter with the greatest evil of his age when he was a newborn left a permanent physical mark on him. He doesn’t have any friends in his town, but when he goes to the magic school, he befriends several people, in particular a boy and a girl. The dark wizard they’re all afraid of has an ominous nickname: he’s called the Enemy of Death. He wants to become immortal.
The similarities between "The Iron Trial" and "Harry Potter" are particularly obvious in the first few chapters, so in the beginning I spent a lot of time rolling my eyes and going “oh, I haven’t heard that one before”.
Thankfully, as time went on, it became less and less similar to the "Harry Potter" series, and I started enjoying it more and more.
“The Iron Trial” is rather short, and not much happens in terms of plot, as most of the book focuses on the world- and character-building. However, the book did make me want to keep reading.
The main character, Call, is a pretty standard middle grade fantasy lead for most of the book: he’s a troublemaker, he’s caustic, he has the bad habit of acting first and thinking second, he’s loyal to his friends, he’s stubborn and proud. The only really good bit of character development he gets is right at the end. It made me appreciate his character a great deal more.
I really liked Tamara. She’s ready to do pretty much anything in order to reach her goals, and has been pressured from her family to be an overachiever. She has a temper. She wants do to the right thing.
Of the three main characters, Aaron is the least compelling one. He doesn’t have any characters fault, and he never rises above his own stereotype. He’s a golden boy the first time we see him and he remains that way for the whole book.
The bully character, Jasper, had the possibility of being very interesting, despite the fact that he came off as really clichéd in the beginning. He was brave and his reasons were sympathetic, and I do hope to see more of him in the next books.
The rest of the characters aren’t very complex or memorable, but none of them are outright unlikable, either.
There wasn’t anything really new and original about the world-building. There’s no sense of wonder,  nothing that surprised me, which is what I look for when I read fantasy. However, it all held together quite nicely and the reader was eased into the world of Magisterium with a lot of skill, so that there were no boring info-dumps.


I loved the twist at the end of the novel. It was foreshadowed a great deal, so it wasn’t that much of a surprise, but the implications are very interesting. It’s enough to make me want to give the next book in this series a chance.
All in all, this book kept me entertained. I recommend it if you’re in the mood for some light reading and you don’t have a lot of time to read. “The Iron Trial” is an okay book, but nothing more than that. I would have given it two and a half stars, but the twist at the end was a saving grace, and it earned the book an extra half star.


I received this book as an eARC from Netgalley and the publisher in exchange for an honest review.
Pubblicato da Unknown