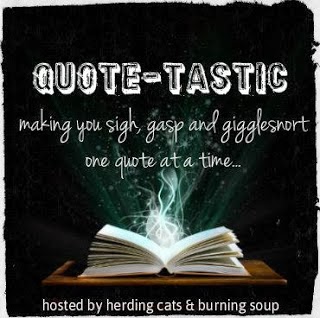 "Quote-Tastic" is a meme hosted every Monday on Herding Cats & Burning Soup . To participate you have to post a favorite quote from a current or past read.
Today's quote is from an old favorite of mine: the Titan's Curse by Rick Riordan.
Nico was such a cute, albeit annoying, kid before (spoiler!) his sister was killed and he found out he was a son of Hades. I enjoy his character a lot, because I'm evil and I like characters with a tough history, but this is a reminder of a happier time for him - and it also is quite funny.

"Hey, can I see that sword you were using?"
I showed him Riptide, and explained how it turned from a pen into a sword just by uncapping it.
"Cool! Does it ever run out of ink?"
"Um, well, I don't actually write with it."
"Are you really the son of Poseidon?"
"Well, yeah."
"Can you surf really well, then?"
I looked at Grover, who was trying hard not to laugh.
"Jeez, Nico," I said. "I've never really tried."
He went on asking questions. Did I fight a lot with Thalia, since she was a daughter of Zeus? (I didn't answer that one.) If Annabeth's mother was Athena, the goddess of wisdom, then why didn't Annabeth know better than to fall off a cliff? (I tried not to strangle Nico for asking that one.) Was Annabeth my girlfriend? (At this point, I was ready to stick the kid in a meat-flavored sack and throw him to the wolves.)