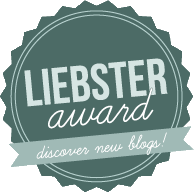 As you've probably read in my previous post, I've been nominated for the Liebster Award.
The Liebster Award is a way to help blogs you like with less than 200 followers to expand their audience. It's a way to give them some deserved attention so our followers can discover them as well.

The rules are:
Link back the blogger that tagged you
nominate 10 others and answer the questions of the one who tagged you
Ask 10 questions for the bloggers you nominate
Let your nominees know of their award

So firsts things first: a huge thank you goes to Mina from Mina's Bookshelf for nominating me!

My answers to her questions:
1. Best book(s) you've read this year?

Fangirl by Rainbow Rowell and Clockwork Princess by Cassandra Clare. Not only couldn't I stand the idea of putting either of them down even for a second, they both reminded me of the things I love about literature.
2. Upcoming release(s) you anticipate the most?
Allegiant by Veronica Roth and City of Heavenly Fire by Cassandra Clare. Actually, I'm sort of dreading the release of City of Heavenly Fire, because I'm scared that I won't like it, since City of Lost Souls was disappointing, or that Clare will kill off one of my favorite characters.
3. Favorite author(s)?
Tolkien, Cassandra Clare, Shakespeare, J.K. Rowling, Neil Gaiman... and the list goes on and on, but those are the top five, at the moment.
4. Is fan-fiction something you would consider as a reader or a writer?
I used to write fan-fiction a couple of years ago, but I don't anymore. I use what little time I have to write to focus on my own characters and world. I still read fan-fiction from time to time, when I'm feeling nostalgic.
5. Would you like to write a sequel for a book you loved?
Here's a though one! I can't say for sure, but I don't think I would even if given the chance. When I loved a book I'm usually happy with how and where it ended, so I don't feel compelled to write what happens next.
6. Is there any author you would like to meet?
I'm going to cheat and name two: Neil Gaiman and Terry Pratchett.
7. What would you ask him/her?
How they got into writing.
8. Your favorite reading nook? Bed, sofa, a bench at the park?
Bed. When I read and something exciting happens I tend to twist into extremely strange positions/sit up/flop down on the bed again, so I need the space.
9. Book or e-reader?
E-reader. Before I had to give away a bunch of books every year, because I only have so much space. Now I don't have to separate myself from anything, and I can take my whole bookshelf with me every time I go on a trip.
I do miss the sensation of having an actual book, but it's not worth the hassle.
10 Which novel would you like to see on the big screen and who would you cast for the lead roles?
Clockwork Angel. Not just because I loved it, but also because it would make such a great-looking movie. The automatons alone would look awesome, and the setting, if done right, could be magical.
I'd cast Kaya Scodelario as Tessa, Gaspard Ulliel as Will and Xiaoming Huang as Jem.

And now on to my own nominations!
The Booklicker
We're all mad here
Diary of a Book Maniac
and so the book begins
The Last Chapter
Books Are My Best Friends
Eternity Trough Pages
Book Bunny's Burrow
Ink Pages and Books
The Voice of Ma

My Questions:
1. What made you decide to start blogging?
2. From where do you usually get your books (library, local bookstore, amazon...)?
3. What book has influenced your current tastes the most?
4.What's your favorite thing about blogging so far?
5.  Have you ever read a book that you wish you had written? If yes, which one?
6. What's the one thing you can't stand in a book?
7. Do you have any weird reading habits?
8. With which fictional character do you identify the most?
9.  Favorite book(s)?
10. What's your favorite book adaptation (in any media: movies, TV, theater...)?

Email ThisBlogThis!Share to TwitterShare to FacebookShare to Pinterest
Etichette: Awards